In the 1800’s and early 1900’s, local people called the forested area of South Venice “the pinewoods.”  Different investors attempted various agricultural ventures, none of which was long lasting.  In the 1920’s, the Nacatee Freight Company operated a railroad to the sawmill town of Woodmere.  They logged the area and rapped for turpentine.  The hurricanes of 1926 and 1928, the economic crash, and then the fire in 1930 that destroyed the town of Woodmere, all had a significant impact to the area.  Homeless people stayed in tents and depended on hunting and fishing for survival.  Ah, the stories they could tell.

An aerial view of the South Venice subdivision in the early 1950’s before the Intracoastal Waterway forced the removal of the footbridges.  Below, Ira and Elise Glockner, employees of  the developers, W&A Corporation. The first model house was at 90 South Venice Boulevard, a two-bedroom priced at $6,900.

In 1952, two brothers from New Jersey, Warren and Arthur Smadbeck, purchased approximately 3,000 acres of land in unincorporated Sarasota County and created the South Venice Subdivision.  They platted out 19,587 lots for sale.  It took two 40X100 lots to build a house.  They wanted to sell

the lots fast so called upon the Venice Area Chamber of Commerce to promote sales.  The Chamber was looking for a way to market the area and bring new families in.  After a nationwide campaign, all lots sold within two years.  In 1956, the developers dedicated 1,600 feet of Gulf Beach to South Venice residents, including the bridges that connected them to the subdivision.

In 1965, the US Army Corps of Engineers’ construction of the Intracoastal Waterway meant that Lemon Bay, which up until then had been a shallow body of water, was to be dredged to allow boat traffic and made part of the Intracoastal. That meant the foot bridges had to go.

To compensate the community and restore access to the beach, the Corps allocated $150,000 for the purchase of a ferry and the construction of docks.

The only entity in existence in those years with which the Federal Government — through the Corps — could communicate was the South Venice Civic Association. And so, the money was put in the hands of the Civic Association and the management of funds and property became their responsibility.

At about the same time, the County proposed ‘trading’ beaches, that is – switching title of South Venice’s north beach for the county beach which separated South Venice’s two beaches. A rare ‘no-brainer’, the trade gave South Venice a now continuous beach. At that point, eight mainland acres from which the north foot bridge originally sprung became something of an “orphan property.”

All during these events, the South Venice Civic Association, a voluntary membership association, acted on behalf of the legal owners of the properties. It was (probably) entirely illegal, but the SVCA was the only entity in existence in this part of the world, and the County and the Corp of Engineers had no one else to deal with. (It was a very different time – transactions like those would never get off the ground today!) The situation was the result of an original failure of the developers, who deeded property to multiple owners without providing any entity to act legally on their behalf. A Trust should have been created in the 1950s or the Civic Association membership should have been made mandatory, which would have given it legal standing. But neither of those things happened. And this community was simply very very lucky that no challenge to these actions were ever mounted.

Now we fast forward to 1999 — the then-board of the SVCA recognized the inherent threat of that failure, and realized they had to act; they had to try to remedy the situation. That board met with Roland Caldwell of Caldwell Trust Company, a resident and strong advocate for the community and the beach property, to discuss creating a proper legal entity. It took a few years and lots of paperwork, but the South Venice Beach Endowment Trust finally came into being in 2000. In 2005, the Trust earned permanent status as a 501[c](3) non-profit foundation, designed so by the Internal Revenue Service.

So that’s how it all happened and the endowment trust was created. The property ownership was always at risk. Someone could have challenged the situation years ago or at least made life difficult. The trust now holds the beach properties on behalf of the lot owners. There are five Trustees who serve for five year terms each; one is appointed each year by the board of the SVCA.

What happened to the “Orphaned 8 Acres” ?

As for the eight acres, it was a little used property restricted by our deeds and Trust to ‘recreational use’. Access to it was hampered by easements, meaning residents could only reach it by foot.

In August of 2008, after years of negotiation, the Trust sold the property to Sarasota County. It will be administered by the Parks and Recreation Department.

The county – as the new owner — is bound by the original restrictions from the 1950’s deed; at present they are considering a plan to convert the property into a canoe/kayak launch.

And What of the Future?

The Endowment Trust is now in a position to preserve our beach and our access to it. The South Venice Civic Association continues to thrive and serve the larger community. The two organizations live side by side and work together for all of us.

And meanwhile, funds from the sale of the eight acres are safely held in the Trust where they will be available to support beach and ferry operations, and allow us to plan confidently for the future.

See how red tide is at the beach! 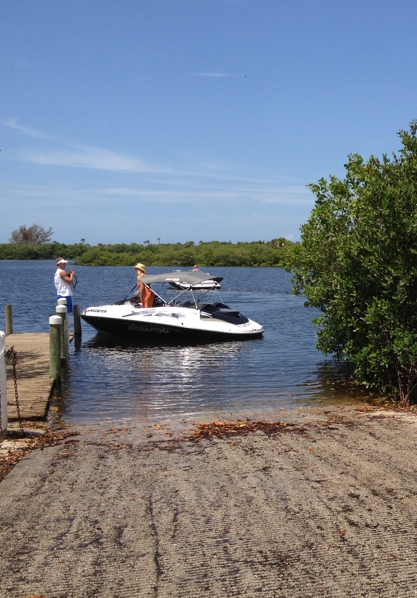